Previous Article Facts you should know about pregnancy tests 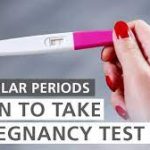 Next Article When You Should Take a Pregnancy Test

It does not necessarily mean that there is always a risk in the workplace environment. The actual exposure is what is most important. It may be necessary […]

Home pregnancy tests: Can you trust the results

Nervousness can set in when you take a home test for pregnancy. Learn when and how to perform a home pregnancy testing — and what the […]

Pregnancy is a 40-week journey that takes place from the woman’s last period until the baby’s birth. There are three phases or trimesters to pregnancy. Multiple changes […]